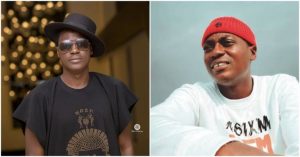 Sound Sultan Laid To Rest In New Jersey, Wife Breaks Down At His Funeral (Watch Video)

In the early hours of Sunday July 11, 2021, Sound Sultan’s Death news broke the internet and left everyone shattered.

The veteran singer exited the world with reports of him battling Throat cancer. Born Olarenwaju Ganiu Fasasi (27 November, 1976), He dead at the age of 44, and is survived by wife and 3 children (2 boys and A girl).

During Sound Sultan’s funeral service in New Jersey his wife, Chichi Morah broke down at the graveyard the moment she saw the caterpillar put her husband into his 6 feet and realised he had finally gone.